Your cart is empty

Have you spotted our beautiful flower jewellery in the 2019 adaptation of Louisa May Alcott's literary classic "Little Women" with Saoirse Ronan, Florence Pugh, Emma Watson and Eliza Scanlen by Greta Gerwig? 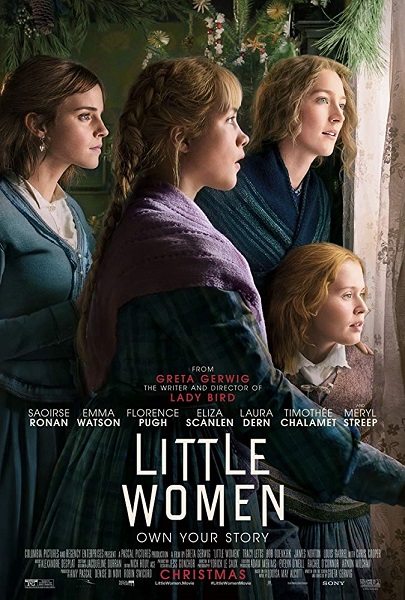 Little Women is the sixth film adaptation of the 1868 novel of the same name by Louisa May Alcott. The story revolves around the lives of four sisters growing up during and after the Civil War. With their father fighting in the American Civil War, sisters Jo, Meg, Amy and Beth are at home with their mother, a very outspoken women for her time. The story tells of how the sisters grow up, find love and find their place in the world.

Reviewing the movie, The Guardian writes: "There’s nothing little about Greta Gerwig’s rich, warm, bustlingly populated and passionately devoted new tribute to Louisa May Alcott’s classic novel of sisterhood. She revives Little Women as a coming-of-age movie, a marriage comedy, a sibling-rivalry drama – and perhaps most interestingly of all, an autofictional manifesto for writing your own life." Read the fill review here

Meg, played by Emma Watson, is the oldest of the four girls and in her childhood scenes, her clothing was inspired by fairy-tale romanticism. Costume Designer Jacqueline Durran helped representing Meg's romantic believes of getting married and having a family by designing her clothes around the ideas of Pre-Raphaelites, and the Gothic Revival, by looking back to Medieval times and the sense of medieval courtly love and romance.

I looked at the Pre-Raphaelites, the Gothic Revival and medieval influences, which were fashionable in the 19th century, and used those to represent her longing for that kind of life.

Our jewellery not only compliments the various dresses with regards to flowers and their importance in romanticism, but also conveys secret meanings. During the 19th century, floriography, the Victorian flower language was born. It was not only fashionable in high society, but also influenced the arts and pre-Raphaelites like Dante Gabriel Rossetti added it to their paintings.